Sometimes all you need to get your mind straight is a short beach getaway. Especially between the holidays. Every one is a bit stressed, family coming, cleaning, sleeping arrangements, money, weather, end of the quarter, end of the year, end of the semester, whatever it is! It’s exhausting.

One of my bests and I decided we just needed to go somewhere warm to just get a way for a few days. We found ourselves finding a very inexpensive flights, non-stop to Miami. It was on Frontier Airlines. We just brought a little tote bag that fits under the seat, and voila. No baggage charges, no seat charges (since we really didn’t care where we were sitting). We just needed an outfit or two, some eyeliner and mascara, and some swim suits!

Once we landed in the Miami airport (the most complicated airport, I still think) we went to the rental car area after going on the shuttle. Once we got the car we began our drive to my cousins apartment. (Now my cousin–2nd cousin? is probably the coolest person ever. She travels all the time; she works for Marriott; and I’m totally jealous. I LOVE looking through her pictures to see where she is/she’s been. Some of those places have been added to my list of places to go! When I was itty bitty, I went to Isabela [in Puerto Rico] with her and her parents, it was so much fun! I thought she was THE coolest even when I was a little girl. Last time I saw her was my brothers wedding, about 2 years ago.) My first reaction with the gate guard was this guy is being ridiculous. But her house was absolutely beautiful and the drive into the complex was full of palm trees and made you feel like you were someplace tropical.

My cousin was still on a business trip in DC (like I said, she’s super cool and I’m jealous!) so we went in and changed and got super excited to go to the beach!!

Now. We wanted to go to South Beach first. But that was definitely not going to happen after we were stuck in traffic for like 40 minutes in. Now we couldn’t find our way out! So another 40 minutes trying to go out. To our defense, there was SOOO much traffic due to 1. Construction (joy) and 2. Art Basel. Now, we were just trying to go out so we could find another beach that wasn’t taking us back through traffic.

So we decided to go to Key Biscayne. We were hopeful! So we made our way over that way, got a little lost, missing our enterance, but it was cool to just look around at the same time–granted we were dying to go to the beach and just slightly cranky. Finally we saw a sign for “North Beach” and we whipped a U-e and went in the parking lot. Parked, Chels lathered up with some sunscreen and we headed to the beach! Finally!!! We were there! We stripped down to our swim suits and got in the water and just floated around! 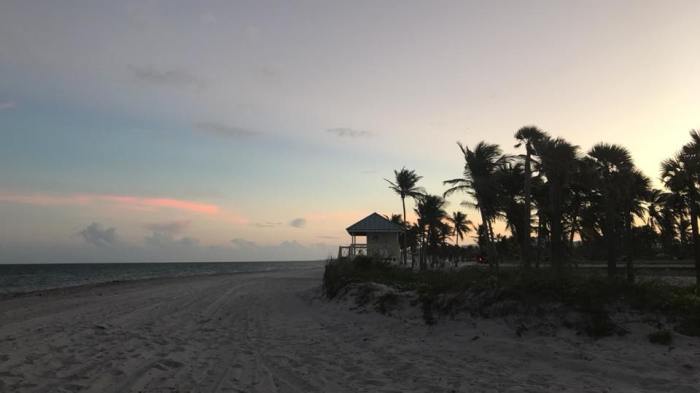 As the day ended we decided we would go pick up some groceries so we wouldn’t spend an arm and a leg on (unhealthy) food. So we found a WalMart and picked up just a few items for breakfast/brunch, and dinner.

Saturday of our trip it was cold and pouring. I’m from Wisconsin, I know cold. But this was like low 50s, if not high 40s. It was cold. We decided to try and find a place without rain! So Chels and I drove to Naples. Yup, straight across Florida. It wasn’t supposed to be raining there. It was quite a beautiful drive, the flatlands (weird, but it was pretty and peaceful). Mostly because we weren’t around Miami drivers who were just awful! Cutting you off everywhere you go. Honking their horn as soon as the light changes–this was not okay. I was taking my foot off the break and I was already getting honked at. Just stop. When we got to Naples we decided to pick up just a few snacks. When we got to the beach it was freezing here. It was sprinkling on and off.

Never underestimate me when it comes to the beach.

I stripped to my swim suit after coercing Chels for a bit to get into the water with me, and we ran in. The water was sooooo warm. It was quite a bit choppy because it was “storming”. We lasted maybe 10 minutes. The sand was blowing on our legs feeling like needles. Our upper halves were freezing while our lower halvess were warm. We ran to our stuff and pretty much did a mad dash back to the car to thaw. This is where we had a massive selfie session. Regardless, we did it! We drove around a bit, and began our drive back to Miami. 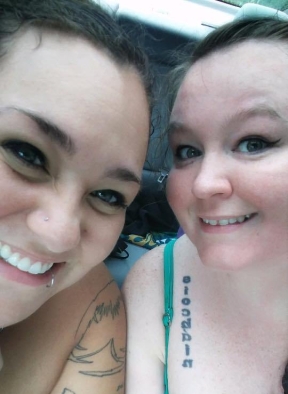 The journey is better than the destination.

And of course we had a wild concert and dance club in the car. It was pretty grand. I even rocked a towel at the rest stop. We came back to Miami and decided to go to the beach. They’re pretty at night. So we sat in the car (with the heat blasting) and rocked out to some old school jams; such as Whitney Houston, Ben E King, and others, until we decided to make it back to Emily’s. Where we were so thankful to just change and get in to our jammies because we were beyond freezing.

Now our last day of our epic Weekend Beach Getaway, started off with a bang, for real. We made breakfast, got ready, went out to get in the car and Chels and I just looked at each other. “Did you move the car?” We both thought and asked each other. The car was gone. Even though we paid for a parking pass. Emily was not happy. So we walked over to the guards station–unhelpful, and not very nice. And when I mean not very nice. They were not. “Mafia” she said (and this past weekend someone else had mentioned that as well). We paid $130 to get the car out of the impound lot–which was definitely not close. (and definitely more than the rental itself.)

I just laughed about this situation. Obviously there was nothing we could do except pay to get it out. So we did. Now, I was laughing at this situation, until I went to the car and noticed there was this massive printer-sized-paper, stuck to the window. Normally when they say your car is going to be towed it’s one portion of the paper being a sticker.. not the whole fricken thing. Now I was irritated. One of the guys gave me a straight razor to get the sticker off. I was just hoping not to get charged more for this.

We shook this off and went to the Beach. It got warm-ish out. I went in the water because that was my plan. 3 days of beach. Well let’s just say the water was freezing. My body was going numb, so technically it wasn’t cold anymore. But I stayed in until I couldn’t help it. Chels stayed on land, but put her legs in for a bit, while Emily fed the birds on the beach. It was really funny. There were a ton!

It was such a pleasant trip. Nice and relaxing. Considering how stressed we were earlier that week. I was going home relaxed. It was wonderful. When we got to the airport we had Sandwich Cubanos and Quesitos. Now it felt like we went to Miami 🙂