On a weekend trip I became familiar with Las Vegas in a different way. I’ve never been a gambler, but it’s something I decided to do again–I graduated college from a school in Minnesota and the age to gamble there is 18. I decided to budget $20 a day for it. I don’t know how to play cards, so I would try my [terrible] luck at Slots. They had some “fun” machines; such as a Friends TV Show Slots machine and a Titanic Movie Slots game that I thought would possibly be fun, and why not. Maybe I’ll win some sort of jack pot, like one of my friends did.

Obviously this was not the case, so we just hung out in the extremely large casino of the Bellagio, a couple of the people in our small group, just kept putting money into the machines to see if anything would happen. Obviously it didn’t,  but we got some free drinks while we were there.

I’m not a big drinker. I’ll have one or two on occasion, but that’s pretty much it. ESPECIALLY when I’m traveling. Since I’m so used to traveling alone, I never want to incapacitate my abilities and sense of direction, and compromise my safety. Especially when I’m not too familiar with the area. And let’s face it, I was getting lost in the Casino when trying to find my way back up to the room–sober, so there’s no way I was going to add some exciting liquids. But of course for first timers, you have to see the Strip, go to a club–even if it is for an hour–you can get an $11 beer or a $19 mixed drink at Omnia at Caesar’s, but the atmosphere is pretty cool. Except you must have to get there early or you can’t get into the pit to dance.

I was traveling with Packer fans and they played that Sunday, so we found a local bar, Rum Runners, so we could sit and watch the game. They had all the television screens on every single TV they had. This was something I was definitely not used to. Especially since Fantasy Football is going on. We needed to check out the other games. The Bucs and Saints were also playing and that was a game that a friend and I really wanted to see. It was a really nice set up, and the owner himself set up some bar stools at a covered pool table so we would have a place to sit down and order food. It was very busy. Who knew there were so many Packer fans out in Las Vegas. The people sitting around us were actually from Milwaukee, like we were, and we even ran into a friend from back home. What was odd was that the drinks waitress could not take our food order (and vice versa) and it was right before half time when we finally got someone to take our order. The food was delicious–granted, we were starving by this point–but the french fries were honestly a dream. I just wanted to keep ordering them, they were fantastic! After the game we stuck around chatted with some people, and the owner thanked us for coming. I cannot remember our drinks waitress, but she was just exceptional! She was fun to joke with, she was always there, she was honestly just fantastic!

One of the cool things that we did do was go hiking. Although I would consider it more Rock Climbing, since they were boulders. I was speaking to a friend that was in Bangkok and he was really confused of that concept. He was trying to figure out what “Vegas” I was talking about. After an enormous brunch buffet we drove out to the Mojave Desert to Red Rock Canyon. The sights were beautiful! Just incredible. However, I forgot my sweatshirt in the hotel but was unbelievably thrilled that the Visitor’s Center did have some for purchase. [The Mojave desert has two extreme conditions. Extremely hot in the summers and extremely cold in the winters. This was an extremely wrong move to have left it in the hotel and not turn around for it. I did have a small first aid kid that I did bring, just in case. I should have had a small day pack that had a water bottle in it as well, instead I had a small purse.] At first we decided that we were going to go hike up to Calico Tanks from the Visitor Center but second guessed it because there weren’t trails leading up to it, so we drove up there, found a place to park, used the restroom, then began the 2.5 MODERATE hike. 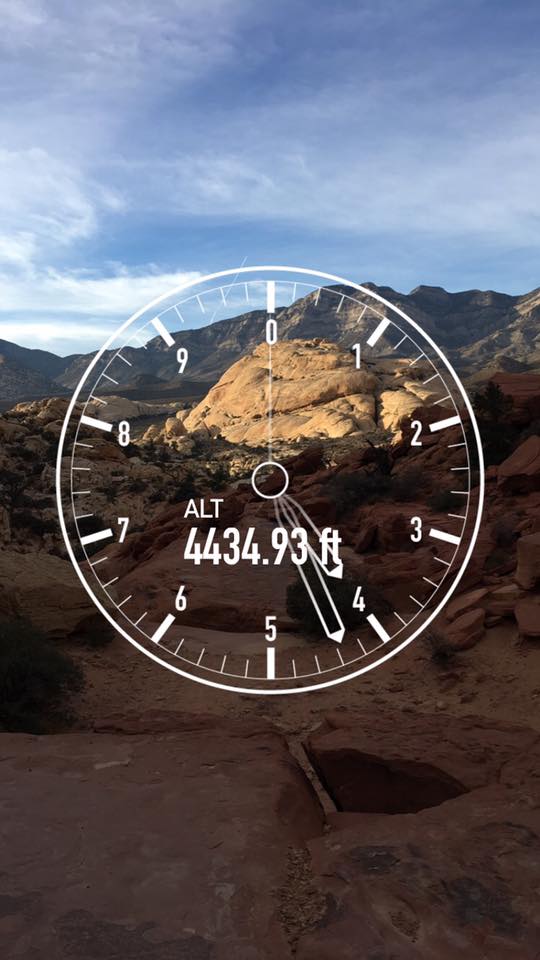 The terrain of the hike was much of what you see here. It was large somewhat smooth rock, there were small shrubs, cacti, trees, sand, and small stones. Some of the rocks reflected steps, and others not so much. This was the desert so you did have to watch out for Rattlesnakes and other things of the sort. We didn’t run into anything. You needed a good range of motion. I’m not a hiking expert, it’s not something I do all that often, so I used my arms, and sat on my butt to get down with no shame. I was out of breath and couldn’t have cared less. The opportunity was unbelievably amazing.

Unfortunately we didn’t manage to finish it to the end due to the fact that the canyon went silent. Everyone was gone. And it was beginning to get dark, and it would take roughly an hour and a half to get back. We were close. Now the whole was back was relatively down hill, and some of use weren’t up to “hiking par”, however those of us that weren’t did an incredible job regardless. (We obviously spent more time at brunch than we thought instead of getting an early start on the trail.) The opportunity to see more than the Casinos, the Strip, and Freemont Street, gave me a new appreciation for my time in “Las Vegas”. Of course, coming to a place like this, you are going to need a vehicle.

Las Vegas was never my dream place to visit. Never even cared to go. Now, I’d really love to go again and do another hike. Or even the same one to completion.