Germany Days Three and Four: In Memoriam and Out Exploring

I decided to sleep in my second day, to my defense it was pouring and it looked like it was still night time, which made it easier to roll over and go back to sleep. And my hips were in such incredible pain from hiking up to Neuschwanstein (which I would still recommend, maybe just take the bus or carriage up!) When I did finally get up and get ready. I made myself scrambled eggs and toast, and tea, and got ready for the day. I wasn’t too sure what I was going to do, because the original plan was to visit a friend in Vilseck. However, I did really want to go to The museum of national socializmus in Munich which is near Konigsplatz.
It was simple. I jumped on the Number 20 Trolley and got off in 8 stops and walked a few blocks. It was unbelievably simple, it was ridiculous! I spent hours in the museum and had to hurry it up a bit because they were soon closing. The museum starts on the 4th Floor (5th floor to us Americans) I got through 2 floors completely, I skipped the top floor which was Post WWI, and I knew I wasn’t going to make it to all 4 floors of information. They do provide an audio guide in several different languages for free, so it was nice to get additional information. There was also, A LOT to read. And I wanted to read it all! Just prepare yourself, it was unbelievably hot in that building.

It had a lot of information of things that I have never learned, and I’d like to classify myself as somewhat of an expert in WWII. This gave a lot of insight of why it happened and what led up to it. It also had a lot of facts, being the Headquarters of the Nazi Party (Munich). The building itself was located at where the Brown House was. Which was the HQ building, that was torn down at the end of the war. The buildings surrounded seemed to be abandoned, looked like they may have had a part in it as well.

Some interesting facts I decided to do more research after I left because they were only brief statements, and I wanted to know more.

Such as Weiß Rose.

To name a small few.

So when I left to go back [home], I immediately began researching.
My fourth day I set an alarm and woke up early. I was going to go discover Munich. Obviously not in its entirety. But I wanted to see some of the places that were mentioned in the Museum, and I was able to do so. I took the Trolley back into town and began waking around. I saw the Obelisk which was erected by King Ludwig I of Bavaria for the 30,000 Bavarians that died in helping Napoleon’s Army invade Russia and died. (Foreshadowing.) The Memorial was quite beautiful.

From there, I began my walk to Geschwister-Scholl-Platz. Which is a circular plaza at Ludwig-Maximilians-Universität München, where there is a memorial for siblings Sophie and Hans Scholl who were the founders of the Weiße Rose Resistance. The siblings and other members were throwing Resistance leaflets to the students of the University. The Janitor saw Sophie and immediately turned her in to the Gestapo. The siblings were arrested and killed. The memorial has some of the leaflets scattered around the plaza.

I sat there for a while. Just looking at how beautiful this Plaza is, and what it really stands for. 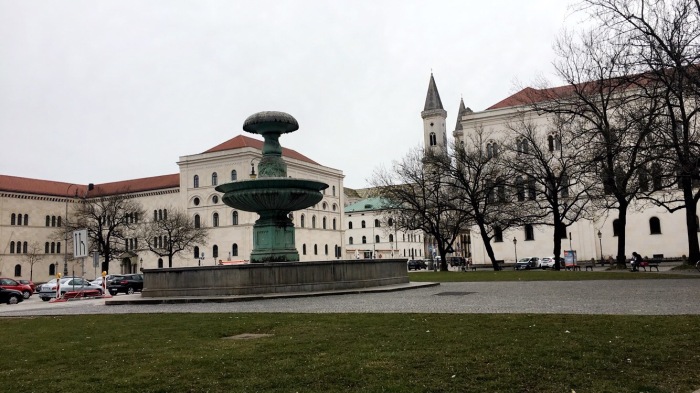 My next stop was Viscardigasse. Now this was about a 15 minute walk, and there was sooooo much to see on my way. One of the really cool things about Munich, is the city is so old, most of it is historic in one way or another. There are so many plaques on the walls of buildings, and on street signs that tell of the historical significance. But then again, it was in German, and well, I can barely order food, none-the-less, read it. I only saw one that was in English, unless it was attached to a museum. Which was super cool, and it was the only one I was actually looking for.

This was the Alley that people took to avoid going past the eastern side of the Military Commander’s Hall, which was a memorial for those that died during Hitler’s Putsch (9 Nov 1924), to avoid diving the “Heil Hitler” salutation. There were two armed SS Guards making sure you did so. The gold is in honor or those brave enough to detour. “Silent forms of opposition among Munich’s Population.”

I ran into some beautiful things. For example, this unbelievable Church. I just stumbled upon it, and didn’t even realize. I noticed a lot of people taking pictures, so I turned around and was just in complete awe. 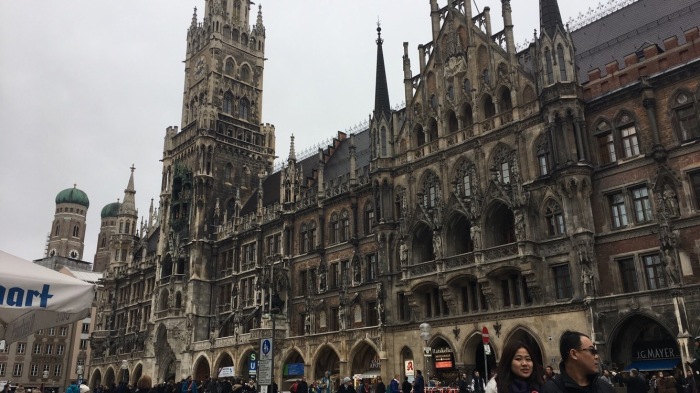 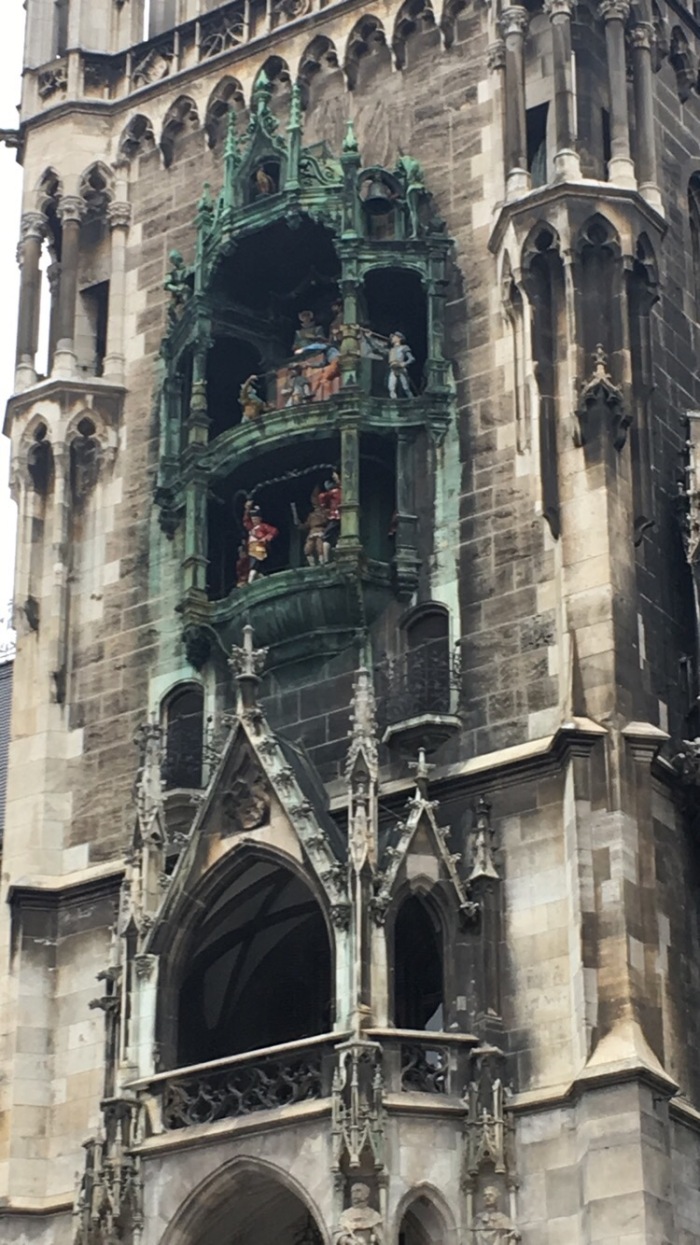 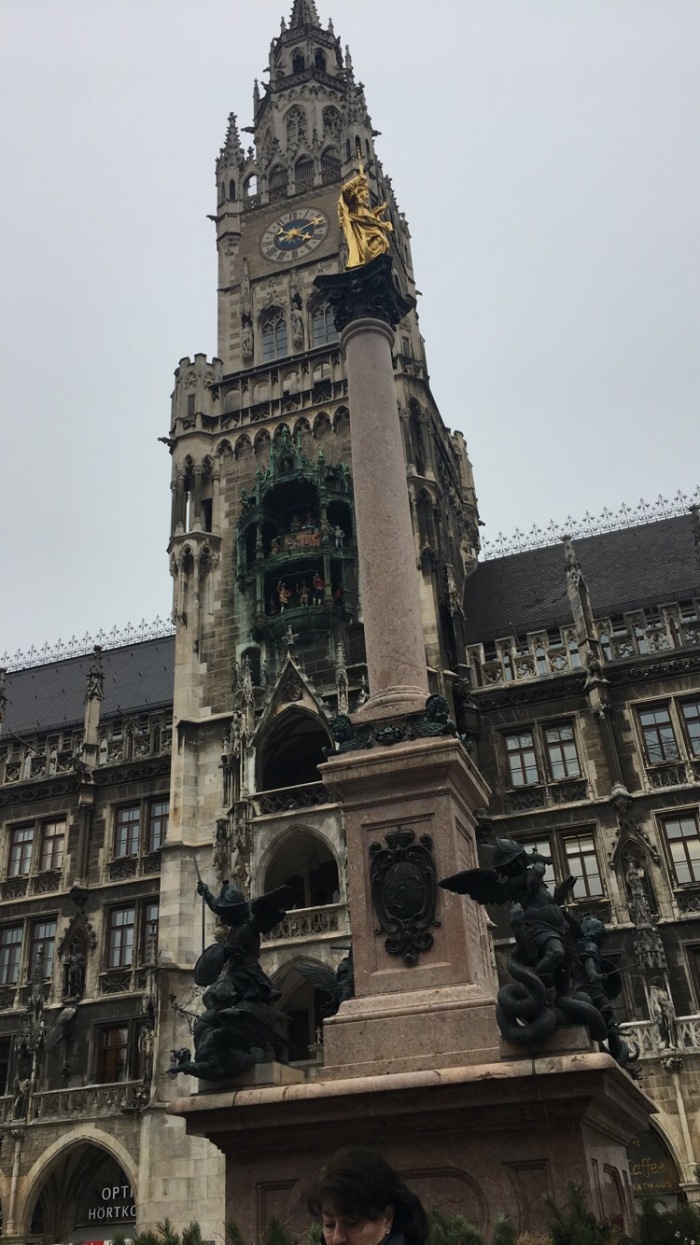 I would have completely missed it. I just kept coming into gems wherever I turned, everything was just unbelievably beautiful.

Most of the Churches that I did pass seemed to be under constructions. Except the one shown above.
I also ran into a market place. It looked like the biggest Farmer’s Market I’ve ever seen. Definitely bigger than the ones in France. They had meat galore, cheese, fruits, vegetables, beer, lots of different foods, many flowers, gifts and assortments of other things. Just walking past smelled amazing! I told a friend that I wanted to bottle up the smell and bring it home. I pictured my Father being in heaven, especially at all the Fresh Meat Shops/Stands. And I could only picture trying to shop with him there. 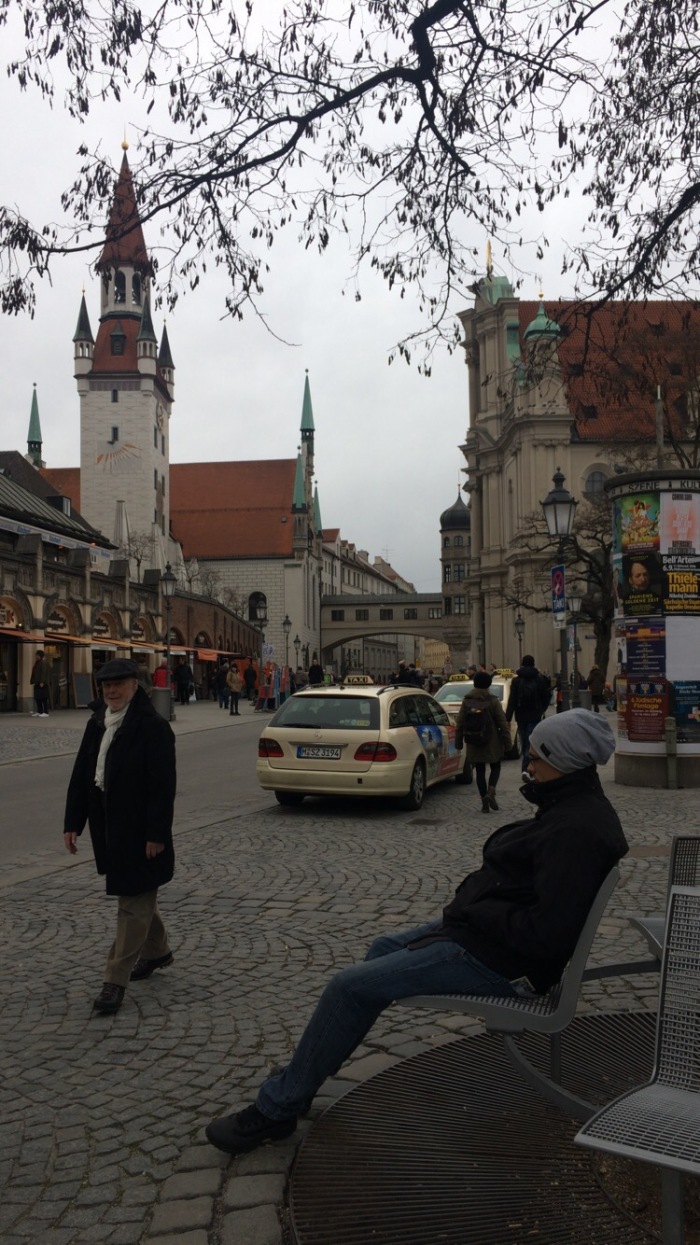 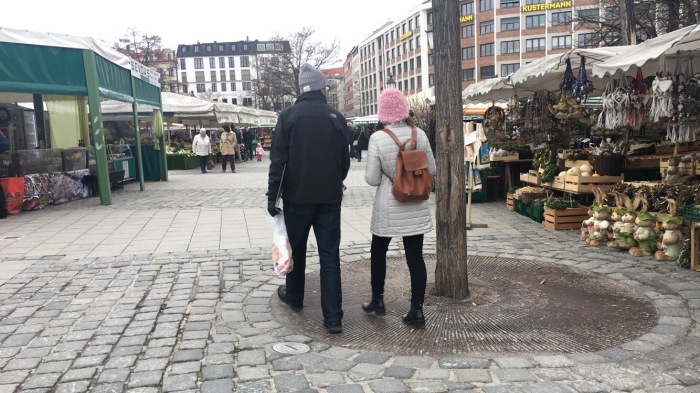 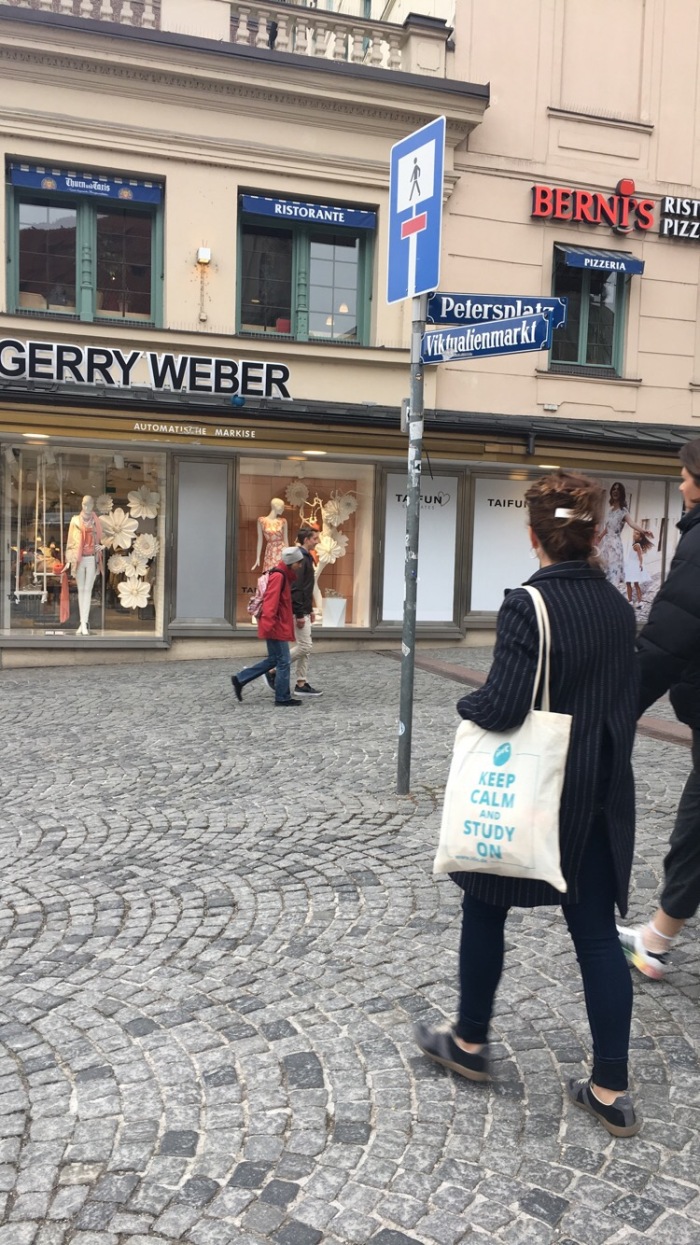 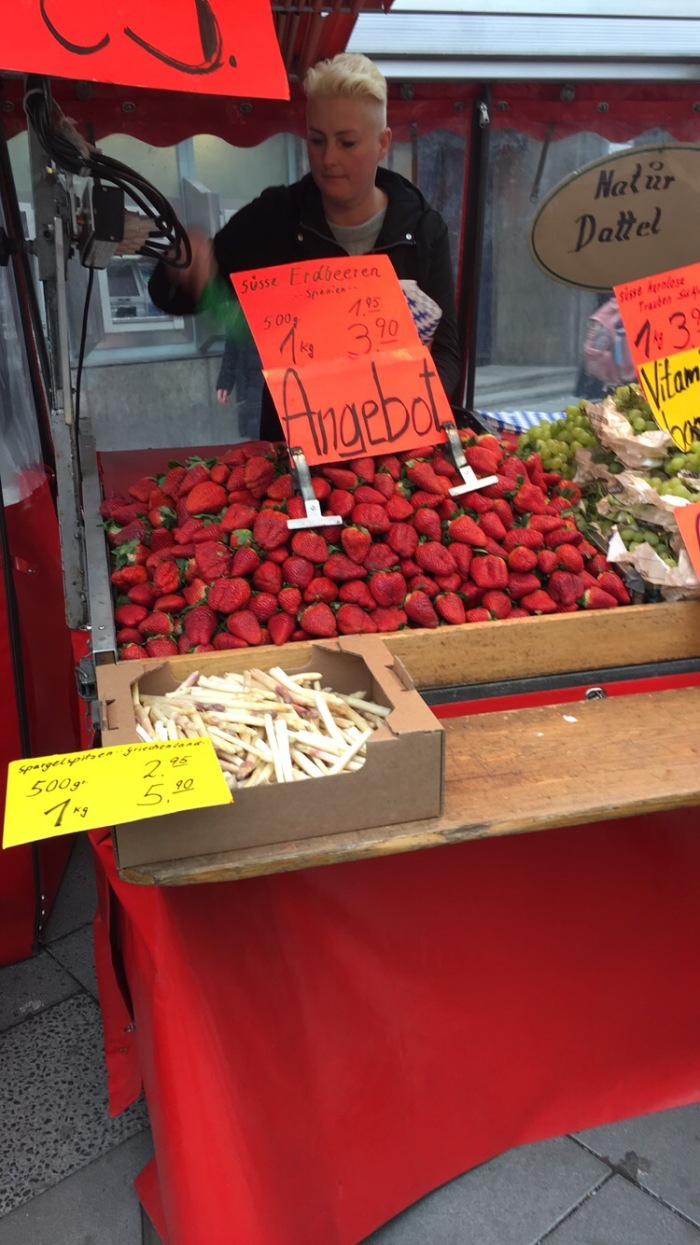 Let me tell you how tempting getting those strawberries where, they were massive. I decided I needed something to eat, even if I didn’t everything smelled so good, I wanted to eat. I settled for this amazing pretzel. It was filled with cream cheese and chives? No idea. It was just fabulous! And gave me a moment to stop and get warm quickly.

I then spoke with two Mormons, one was from Utah, the other Berlin. It was actually a really cool conversation. They asked me to partake in a survey, which I did. And then we talked about Religion. They weren’t pushy. They weren’t forceful. It was a really good conversation. I’m not planning on changing my Religion, but I would like to know more about theirs. I guess that’s where my History always comes back. My favorite class was My 8th Grade Religion Class with Mr. Danner; where he had us study other religions, and visited their place of worship, and give a report. It was by far the coolest thing I’ve done. I, of course, chose Judaism–ever since my brother was in “I Never Saw Another Butterfly” when he was in 6th grade (I was in 4th), my infatuation grew. It was the first time in my life where I really wanted to learn. Granted, that play, and that class, changed a lot of different aspects in my life, leading me to visit places associated with them both, and getting my degree in association with it as well. So that’s a side note, I like Reliions, Cultures, and History. And funny enough the Utah Elder, who’s family was from Tunga, and he knew Jabari Parker, the Bucks player. Crazy small world.

On my way around I did also notice a Shrine on the Statue of one of their Kings. I saw it, and instantly couldn’t even believe it. Munich is still mourning the loss of Michael Jackson. 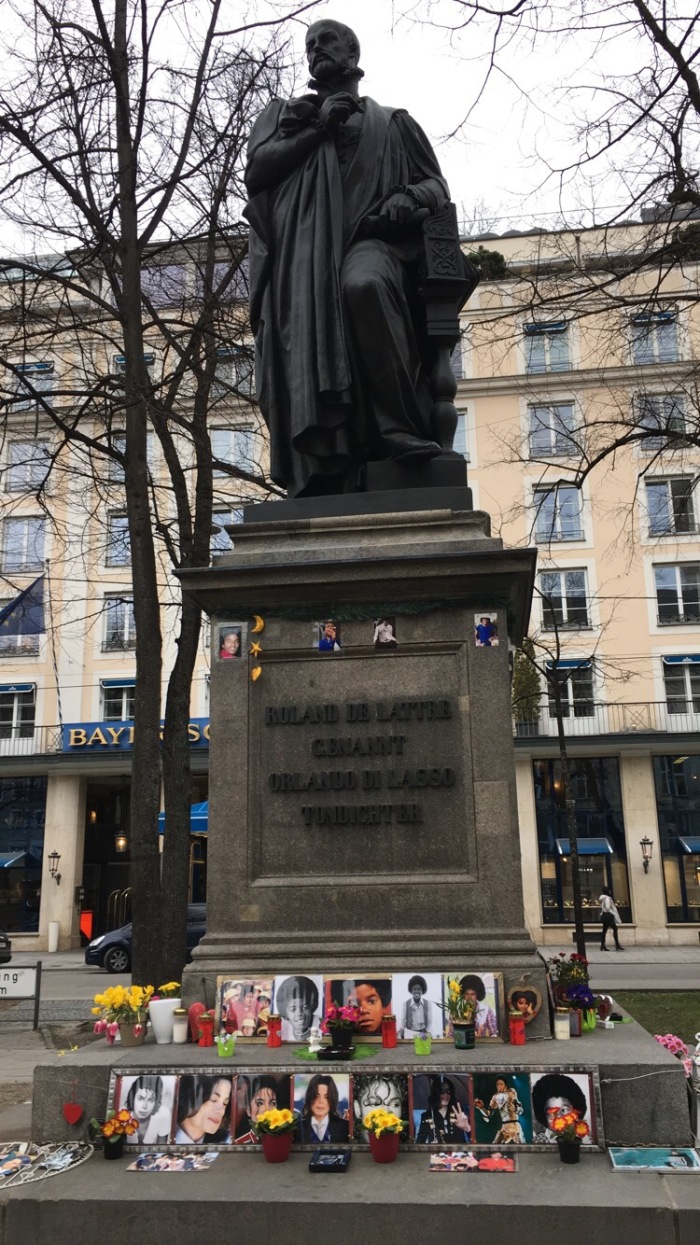 Obviously I have a million more pictures, but don’t want to crazy overload you.

‘A’ohe pu’u ki’eki’e ke ho’a’o ‘ia e pi’i - No cliff is so tall it cannot be climbed.
“An ocean breeze puts a mind at ease.” What’s better than camping on the beach in February?
Two things to take note of when hiking in Hawaii. The first: The hiking distance posted on apps is not always correct. The second: add a few hours.
"Swing through life as fearlessly as you did when you were a kid."
I still can’t get over the incredible views you find all over the island. Especially when you don’t expect them.
Here are some fun pineapple facts you didn’t think you needed to know:

‘A’ohe pu’u ki’eki’e ke ho’a’o ‘ia e pi’i - No cliff is so tall it cannot be climbed.
“An ocean breeze puts a mind at ease.” What’s better than camping on the beach in February?
Two things to take note of when hiking in Hawaii. The first: The hiking distance posted on apps is not always correct. The second: add a few hours.
"Swing through life as fearlessly as you did when you were a kid."
I still can’t get over the incredible views you find all over the island. Especially when you don’t expect them.
Here are some fun pineapple facts you didn’t think you needed to know:
Loading Comments...
%d bloggers like this: