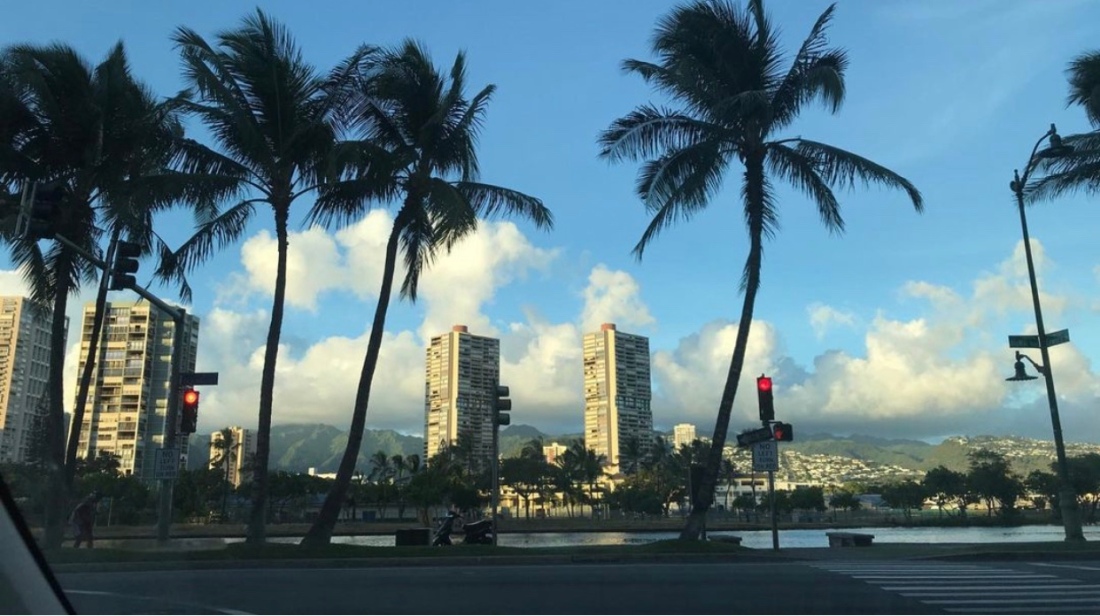 One Year in Hawaii: Moving and Learning

I suppose I should begin with Alooooooooooha!

On August 22, 2019 I moved to Hawaii. Yes, it’s been over a year since I’ve posted, and I’m going to try and not make that mistake again. Moving to a new place is exciting and complicated, and your whole mind is flooded with everything that you have to do, things you have to bring, check list upon checklist upon checklist. Like, finding a place to live, narrowing it down with what to bring, how are you going to get what you have out there, do you have all important documents.

While it was something that has always been in the works in my head. Things worked out in the way that I was able to do it. The company that bought–“merged” with my company had a division in Hawaii. The moment a position posted out here, I applied for it instantly. It was what I had wanted for years, and here was the perfect opportunity.

I wish I could say that I had a ton of time to pack up and move out here. It came down to a month. I had a month from when I had the job offer to move out to Hawaii. Let me tell you, that definitely does not give you time to do all that you need to do. I can honestly say, I dont have most of my things (still). When I think about it, I had more of my stuff when I went to college, than moving out here. But it means you get to buy new stuff, or realize what is truly important. Honestly, I was sleeping on an Air Mattress until January/February.

One of the things that I was able to bring was by far the most expensive thing I have, my car. (Unfortunately, I wasn’t able to fill it with my stuff, which would have been super nice!). That included me driving from Milwaukee, Wisconsin to Los Angeles, California. Now, this is the moment where I am soooo glad I have friends all over the United States. Without them letting me crash at their place during this drive, I would have been completely broke. (And, it’s not like I had the time to save up for the move in the first place.) But I made it! Not sure how it all came together, but I made it.

With huge thanks to the following people:
Mom and Dad— honestly, I never would have been able to do this move without your help, mentally, emotionally, and financially. Especially the independence you raised me with. And also calling me every couple of hours to make sure I was doing okay on the drive to L.A.
Amanda, Kate, Sara–for hooking me up with a place to live. The amount of stress you eased me with, you truly will never ever know.
Amber, Erica, Adrienne— letting me stay with you in Iowa, Denver, Las Vegas. Not only did you save me hundreds of dollars, you also eased my nerves on this journey moving out here, and helped keep my sanity after hours and hours in the car.

Things somehow seemed to work out. And here I am, still in Hawaii, and still loving the fact that I live in Hawaii!

Things you learn when moving to (or visiting) Hawaii.

1. Similar to an emissions test (in Wisconsin), for those of you that know what that is, Hawaii has a Safety Inspection. This was the most impossible thing that I had experienced. While an emissions test, makes sure your car is running smoothly and within city regulations, a safety inspection (at least for my experience going to 3 different places) was to make sure you car was safe on the road. Don’t hate on me, I wanted a second opinion, and maybe a third.

The issue with my safety inspection, was my windows were too dark. Cool, I had to remove tinting I never put on and thought was standard with my car. (I also never understand the heat difference with and without tinting, until they were removed. Hundreds of dollars later.)

Keep in mind, your safety inspection is quite a process. If all goes well the first time, you get the “Pass” on the Inspection,, then take it to the DMV, Then go back to the place where you got the Safety Inspection to get the sticker on your car. If you don’t pass, it becomes a bit lengthy of a process. (BIIIIIG eye roll.)

Also, registering your car may cost a fortune.

If you’re going to ship your car, I recommend re-registering it in your state before you move. That way, you’re paying less than $10 to re-register it in Hawaii for your first year. (Welp, that’s going to be coming up soon.)

2. It can take you an hour to go 11 miles in rush hour. If you’re used to being in rush hour (like I am), sitting in traffic going to work for an hour + (obviously, depending on where you live) may be nothing, but when you consider how far you are actually going, that’s when it makes you wonder.

Traffic is no joke.

3. Utilize the HOV and Shoulder Lanes when you can. These will make your commute so much easier! Just make sure you know the rules of it. The first time I drove on the Shoulder, I was completely terrified–now I don’t know how I ever drove without this extra lane.

4. There are no billboards. To keep the island beautiful, naturally. 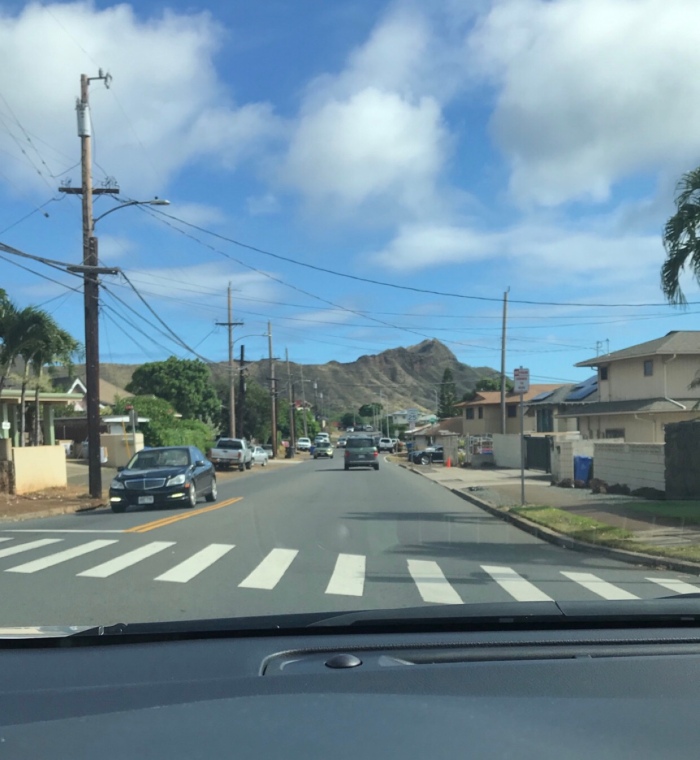 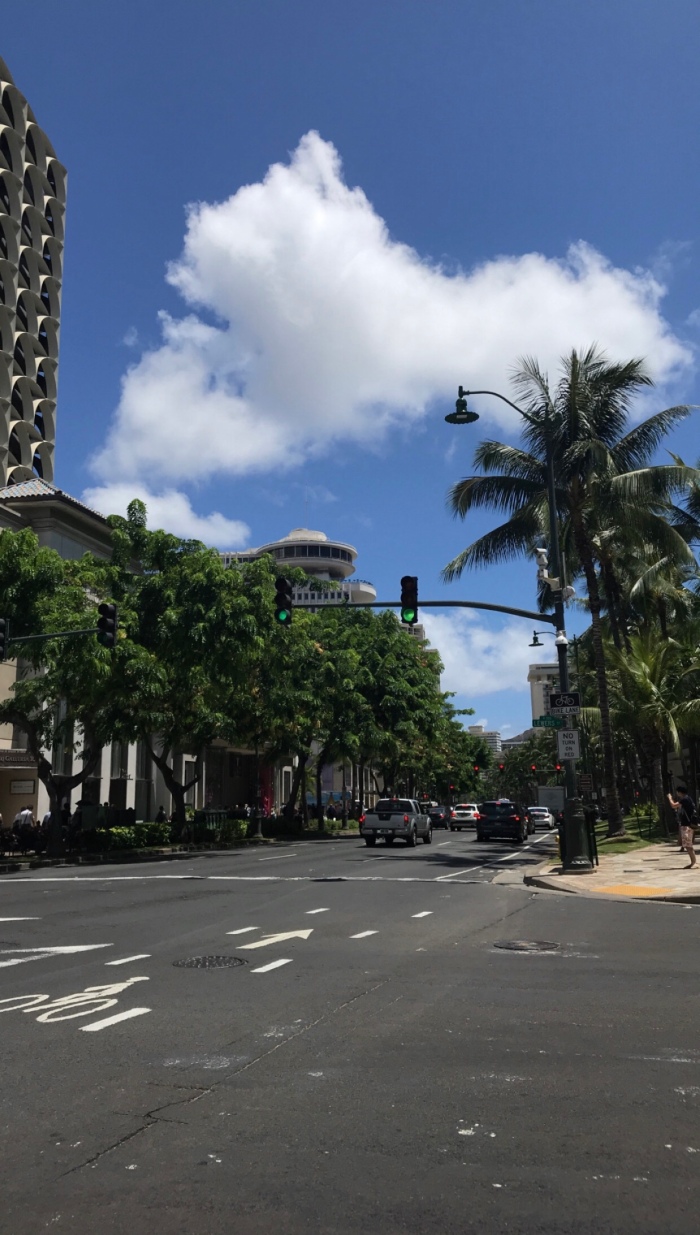 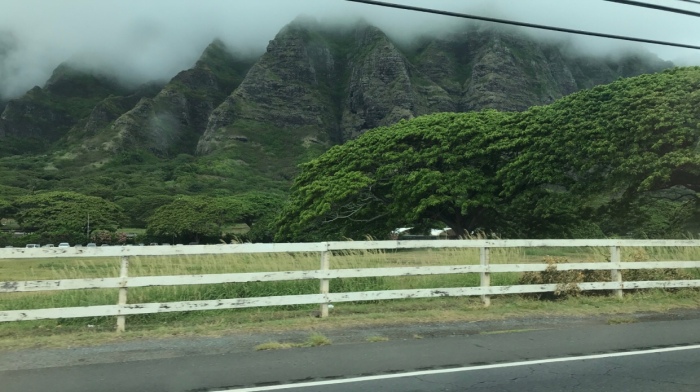 5. Hawaii is extremely clean. There is a $500 fine for littering. You won’t see cigarette butts all over the place. Of course, there are some jerks. I would recommend not doing it. Don’t be that jerk. There are also many groups that do clean up the beaches, and hiking trails. It is your kuleana (responsibility).

7. Honking means letting people in, not letting them know they are a terrible driver. Keep this in mind when someone looks like they’re going to hit you. Don’t honk, they then think that they are in the clear to go in front you. It’s dangerous out there.

8. You come to realize that everyone is horrible at parking. Remember when I mentioned the lanes on the roads are much smaller, well let’s just say, the parking lines follow suit. Besides the fact that parking is unbelievably difficult, it can also extremely expensive and hard to find. (Mostly in the Honolulu, Waikiki area.)

9. You have to hold the gas pump the entire time. This is one of the most awful things that I’m reminded of, everytime I get gas. Apparently the pumps don’t always shut off when they had the automatic stops, so they had been completely removed years ago (or so I’ve been told).

10. You also cannot use the bathroom at a gas station. For someone who’s done a ton of roadtrips and long distance driving, this was something. I wasn’t used to. Go to a fast food place, buy something, and then use the restroom (some places require a key).

11. Oahu housing and rent are ridiculously expensive. If you’re moving out here (and not military), you will most likely need a roommate or two.

12. Certain things don’t exist here such as dollar menu and dollar stores. Everyone states that Hawaii is super expensive. It’s definitely not a budget friendly. However, most items are only $2-3 more.

13. Military/DOD friendly pricing (obviously). There are military discounts on pretty much everything. For example, monthly parking in Waikiki is at the least $100 less expensive.

15. Walking in Waikiki, is like walking through a maze. Swerving through people, dodging Instagrammers and photographers. They also congregate in the middle of the sidewalk to text, look at their maps on their phones, and to just stop and chat.

16. Elevator etiquette is also very rare in Waikiki. There’s no such unwritten rule of those getting off the elevator first before people step on.

17. In Waikiki, there are people in neon yellow/green shirts who are helpful and will give directions. They are there to help you. But they will also scold you if you walk without the crosswalk being on–even if you were crossing before it changed.

18. The majority of the people here are super nice and friendly.

19. People of all sizes wear their bikinis to the beach.

20. You will also see a lot of homeless people and homeless camps, everywhere. I was told, they may be homeless, but not everyone is jobless.

21. Sunglasses and sunscreen are part of your every day life. If you forget your sunglasses, you regret it instantly.

23. Shopping is hard. I’ve come to the conclusion that I can’t find everything I’m looking for at grocery stores. At first, I would get so frustrated, I would just leave without anything that I was looking for. It takes time, so try not to be in such a rush to do your shopping. (I’m usually the go in and out for shopping, but have learned it’s okay to slow down.) Obviously, different grocery stores have different items. It takes some getting used to, to find the right places.

24. Get to know the culture. Try the local favorites (spam musubi), learn a word or two of the Hawaiian language (you will see it on menus [ono, laulau, haupia, liliko’i] and may hear it when getting directions [windward, leeward, mauka, makai]), learn some of the history—how Hawaii became a state.

25. This island is absolutely beautiful. I know, this is a no-brainer. It’s been a year and I still drive around and can’t get away with how beautiful it really is. People here respect their island. They take care of it. You will see people cleaning up the beaches, the hiking trails, and just locals/natives picking up garbage on the street. Respect the island. It’s much more than just keeping your trash with you. Hawaii Residents and Natives are very proud of their Islands.